I belong to a Yahoo group, and I sent of a couple of swaps for that earlier this month. Now I've heard that they've been received, I can show them here! 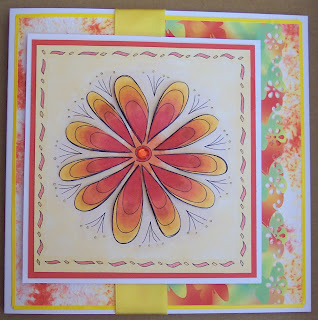 This first one was for a swap called 'Flaming June'. I used another image from Trees A Ward in Digistamps.  I was keen to try blending several colours in this, shading between red and gold with a couple of stops along the way. I used Promarkers, of course.
The 'splotchy' paper is from my collection and the butterfly one is one I made for another card, but the colours were perfect to use here. I also used a Martha Stewart punch, some ribbon and a sticky gem. 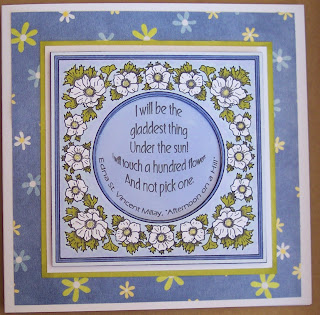 This second card was for the new alphabet swap, and the letter was 'A'. I struggled a bit with that - I couldn't think of any 'A' images I had, until I remembered my Dover flowers CD. In there, I found an outline image of some Avens. I coloured them, again with Promarkers, and cut and layered the centre circle, adding a sentiment I found online. The backing paper is from a magazine.
Posted by Josephine at 20:52

These are so bright Josephine! The flower has been coloured beautifully, your swap group sounds great too! Hugs Rebekah x

Gosh Josephine these are beautiful I love the flaming June image the colours are great and the second one oooo is gorgeous I love them both fabulous work.
Hugs
Lorraine x