It's not a colourscheme I'd choose if left to my own devices. I love various turquoise shades with brown, but I'd normally be loath to add the khaki to the mix. But that's where colour challenges come in, isn't it? They get you to try things you otherwise wouldn't, and that's what this time's Colour Create challenge is asking for, with an optional extra of circles. 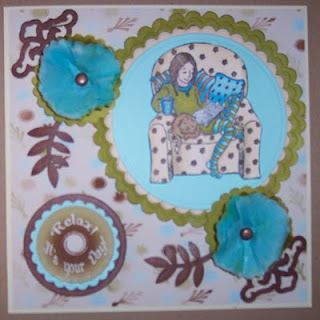 Now, the problem with challenges like this is that while pretty much everyone thinks of the same sort of colour when the basics like 'red' or 'yellow' are mentioned, some other colours are less clear - at least to me. And providing a sample on the site isn't foolproof either because in this case, the image looked like brown, pale turquoise and two shades of grey. Now I know that's a feature of my screen, but I'm pretty sure I'm not the only one with that problem. And then there's the definition of the colour. Khaki. To me, that's olive green, but a quick check of online sources suggests that there are many different khakis and they range from sea green through olive green to brown. So, I used my own 'definition'.

The image is a Sugar Nellie stamp and it's coloured with Promarkers. I used my trusty Wizard and nesties to cut various circles and a circular frame as well as the computer-generated sentiment. Then, I used the same nesties to cut layers of tissue paper which I then coloured with my Promakers to make the flowers. To finish it off, I added an element from the Spellbinders lattice pendant die, and then added a couple of leaf fronds cut with a punch. All of those were coloured with walnut Promarker. The background paper is my own design, using my Promaker colour chart to match the colours in the image, and Photoshop Elements to put it together using some shapes and gradients.
Posted by Josephine at 16:04

great card.. Good use of the colours!!
Thank you for joining us at Colour Create.
hugs, Janiel