So, the challenge at Crafty Cardmakers this time around is to do something that challenges you. To use something you've bought and then consigned to a drawer or cupboard where it hasn't seen the light of day. Well, there are a few of those - I'm thinking specifically of some collage stamps I have, but in truth I have used those - just now the way I expected to. So, what haven't I used at all?

Well, in Hobbycraft a while ago, they had reduced a thing called a 'wire designer' and I really liked the idea of making wire patterns to add to cards, so I splashed out and bought it, along with a selection of beautiful, jewel-toned wires. There were some patterns supplied with the designer, but every time I tried one it was a complete failure. It's about that time that I consigned it to my bedroom - where things I don't use so often tend to be put.

Anyway, after considering this challenge for a while, I managed to find the various bits I'd need and tried the supplied patterns again. I wasn't any more successful than before, so I had a play on my own and came up with a basic flower shape that seemed to work. Four more and some freehand writing later, I came up with this: 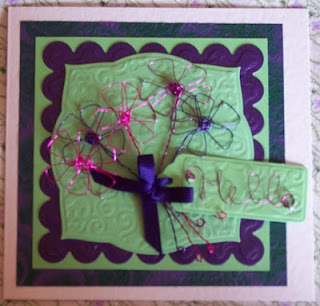 I've also used my trusty Wizard to cut my layers and a tag, and all have been textured using a Spellbinders Impressability. I love the way you can emboss the die shape at the same time as you get the texture with these - it looks so much more 'finished' as a result. I attached the flowers and word to the card using a few single stitches and anchored the thread on the back with standard sticky tape.

I've also come away from my comfort zone as far as colours are concerned. I looked at the colour wheel and decided that since my flowers fell into the red/red violet/violet area of the wheel, I should go for a contrast and went for a green for the background then matted that onto some very dark purple, green again, and then found some paper I've had forever which is a rose pattern with dark green and dark purple. It's not a colourscheme I've tried before - not that I've got a problem with green and purple - it's just that I'd normally stick to pastel shades and not go so dark. I was really quite pleased with the result, and can definitely see me using something similar again - especially the greeting. It looks better (to me) than hand-written, but you can basically do whatever you want to which is quite liberating!
Posted by Josephine at 14:36

Thats fab hunny! I remember these the last time I went NEC which would have been around 2004, they were very popular back then but you never see them now. Metal is making a huge comeback this year so good time to play! Seems to me you're better going with your own flow as these have turned out great!

Thank You for challenging yourself at Crafty Cardmakers x