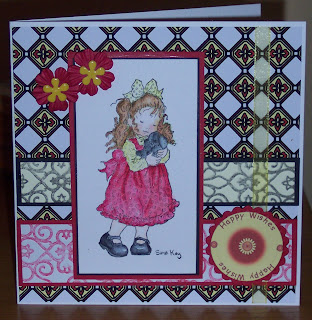 The first is a sketch challenge from Sketch Saturday and the second is a colourscheme from Colour Create which called for red, yellow, black and white.

I'm one of those who find it difficult to incorporate black in cards, but I remembered that I'd made a paper with those colours from a Dover Books sample ages ago. Of course, I couldn't find it, so I had to start from scratch. The original is an outline of fans against a background, and I took one repeat of the background, coloured it, and made it into an A4 sheet. The two parallel backing sheets were made by inking up my new Spellbinders Impressiblity (it's called 'Floral Stone') and embossing pieces of white and yellow card with red and black. A bit of matting finished both of those. The image is one of the Sarah Kay stamps I bought recently. I added some ribbon, flowers and a sentiment and that's it. The sentiment is kind of an experiment. I like the look of the new stamps from Spellbinders that are sized to fit nestibilities. It's a great idea, but when I looked, the only set I thought I'd use in terms of the sentiments was just too big to be practical for cardmaking. So, I decided to do my own! I played in Photoshop Elements, sized a circle and placed each letter and symbol separately. (Unfortunately, there's no option to have anything other than a horizontal line as a baseline for text in that software, so I had to twist each letter separately and place it.) Next time, I'll probably make things a little smaller, but the theory works and of course, I can have any wording I like - and any image (within reason) in the middle, so it looks like I might have saved myself some money ...
Posted by Josephine at 12:15

Gorgeous card, what stunning papers and such an adorale image.
Thanks so much for playing along with us at CC.
hugs Heather xx

Great card, love the image you have used and your great papers,

Thank you for joining us at Colour Create this week.

Great Job Josephine! That background is amazing! WOW! And your image is beautiful and coloured perfectly! Great Job with your Photoshop experiment! I really enjoy printing my own sentiments too! Thanks for joining in at Colour Create!

What a beautiful card..love the papers!!
Thank you for joining us at Colour Create Challenge..
hugs, janny

A wonderful card and such a sweet image! Love your colouring and design and great that you made your own sentiment to fit in ps. Glad you could join us at CC this time. Chris :)

wonderful card,thanks for joining us at sketch saturday.
louise xx

Fabulous card, love the papers and image Thanks for joining Colour Create this week!